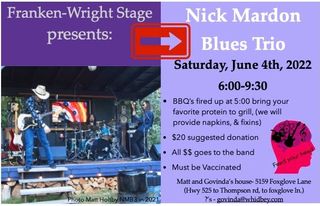 The Nick Mardon Trio performs at the Franken-Wright Stage on Whidbey Island on Saturday June 4th at 6:00 pm!

This is the second annual summer concert hosted by Matt and Govinda Holtby at their property off of Highway 525 in Whidbey Island!

-BBQ’s fired up at 5:00 bring your favorite protein to grill, (we will provide napkins, & fixins)

Email govinda@whidbey.com to RSVP and get details.